Dr. Smith has discovered the root cause and cure for migraine headaches. This discovery was a process that started during his facial plastic fellowship where he was told some patients with bad headaches felt better following a rhino-septoplasty. He took that information and explored it in his own practice. There were patients with horrible headaches that would get better following their nasal/sinus surgery.

An initial study of his practice found that 95% of patients that came to him had a diagnosis of migraine and 88% were migraine free following his procedure. He called these headaches migraine imposters – they were severe headaches that mimicked migraines.

Years later, after an appearance on The Doctors, he started receiving sinus CT scan disks from people all over the country. These people had been diagnosed and treated for chronic migraines of all types at top medical centers including Mayo Clinic, Cleveland Clinic, Johns Hopkins, University of Michigan and Vanderbilt. Nearly all of the scans had the specific abnormalities in the nose that Dr. Smith knew caused the migraines, and following his Smith Sinus Migraine Technique more than 90% were permanently migraine free.

With 90% of these random people from all over the country getting permanent relief from their chronic migraines with a nasal/sinus procedure, it was now crystal clear to Dr. Smith that he had discovered the root cause and cure for one of the most devastating medical conditions in the world.

Migraines negatively impact the lives of 40 million people in the United States and over 1 billion worldwide! These people are depressed, disabled and even suicidal. The economic impact on our healthcare and economy is in the billions of dollars. Some fortune 500 companies lose tens of millions of dollars annually due to absenteeism and poor productivity related to chronic migraines.

The ultimate goal of Dr. Smith is to educate the general public and the medical community to abandon the current dogma that migraines are a mysterious condition that originates in the brain and has no cure. The time has come to make it clear that there is no mystery. Chronic migraines originate in the nose and sinuses and there is a very logical explanation how abnormalities in the nose cause the severe migraine pain.

Migraines are head pain and the current algorithm is to obtain a scan of the brain. The brain is only half of the head and only 5% of brain scans will find a reason for a headache (tumor, aneurysm, brain abscess, a bleed). The other 95% of people with a normal brain scan are then left to either fend for themselves to find relief or subjected to endless medicine trials, toxin injections or multiple procedures (lumbar punctures, hysterectomies, spinal stimulator, etc.). This group of people with normal brain scans deserve a complete evaluation of the head in the form of a sinus CT scan which reveals the presence of abnormalities in nearly 100% of migraine patients!

Dr. Smith is one of the world’s foremost experts and must review the sinus CT scan and perform his patent pending Smith Sinus Migraine Technique to achieve the very best outcome. That is because their doctors don’t know what to look for on the scan.T here have been countless people who have reported their doctors saying their scans were normal when they were not. Some radiology reports don’t mention the specific abnormalities because they are looking for gross abnormalities related to breathing and sinuses, not migraines.

Dr. Smith has thousands of migraine free patients. They include all types of chronic migraines some of which are caused by genetics, hereditary, concussion, or traumatic brain injury. It really doesn’t matter what they cause. All chronic migraines and headaches need a complete evaluation with a sinus CT scan reviewed by Dr. Smith.

Get Your Copy Today!

Dr. Smith’s book, The Migraine Imposter, is full of information gathered over the past 20 years. The book provides detailed accounts of case studies, personal research and personal experiences of how migraine-like symptoms were created due to a deviated septum. It is proof positive that there is an actual connection between the painful headaches and the bent or crooked bone and cartilage between the two nasal passages. Purchase the book today and become educated on what may be the source of your migraines. 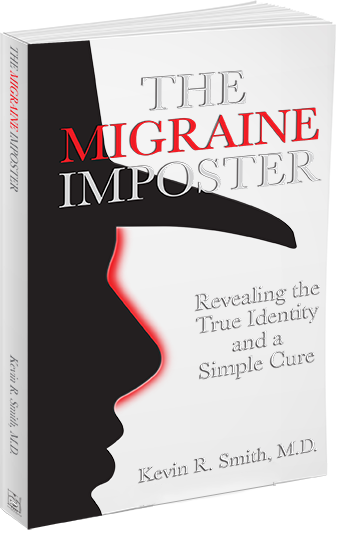 True migraine sufferers tend to have visual cues, or auras that occur between 10 and 30 minutes before the onset of severe headache pain. They can see flashing lights, have blind spots, or lose vision for a short time. They may also have other symptoms that come with severe headache pain, like nausea and vomiting. While many theories exist for the cause of migraines, the most commonly accepted is the blood flow theory, which focuses on blood vessel activity in the brain.

A migraine imposter may have the same level of pain, accompanied by nausea and vomiting, but can have other causes, such as a bone spur of the septum that contacts nasal turbinates, and triggers pain.

Why do more women suffer from migraines than men?

The National Women’s Health Information Center theorizes that women are more prone to migraine headaches because they often have more job, family, and social commitments. Hormones can also be a trigger for migraines, which is often referred to as “menstrual migraines,” even though women suffer from migraines at times not connected with their menstrual cycle. (Source: National Women’s Health Information Center)

What causes a deviated septum?
The cause of a deviated septum is trauma of some sort. It can occur as early as birth, when the baby’s face is smashed during the delivery process. As children get involved in sports, they can have injury to their nose and a resulting deviated septum. Teens and adults can be involved in car accidents, contact sports, or abusive relationships. Professional athletes are constantly exposed to potential nose trauma, which misdiagnosed can lead to shortened careers and millions of dollars lost from contracts.
What exactly is a septoplasty? Do I have to go into the hospital? How long does it take to recover?

This surgical procedure involves removing the deviated portion of the septum that is making contact with very sensitive structures in the nose, called turbinates. These turbinates are vascular structures that are innervated by the trigeminal nerve. They swell in response to colds, flu, and hormonal changes such as menstrual cycles. Once the contact point is removed, the pain goes away.

Septoplasty is performed in an out-patient setting, and is covered by insurance. The recovery can be in as little as two days. Patients who suffer headaches on the day of surgery are amazed to find relief upon awakening in the recovery room.

How successful is septoplasty in eliminating, or significantly reducing severe headache pain?
Dr. Smith has analyzed the outcomes of patients in his own practice and found that he provided relief to 90% of patients–40% cured, and 50% that reported less frequent and/or less severe headaches. The success rate in his practice is correlated to patients identified as having a deviated septum.

At the Smith Sinus Migraine Institute, we offer the very best in facial plastic surgery procedures, including facelift, rhinoplasty, and eyelid surgery. Led by renowned board certified facial plastic surgeon, Dr. Kevin Smith, we only provide the highest quality patient care and use only the latest in medical technology and surgical techniques.